Call us now to arrange a visit
You are here: Home / Latest News / A visit from Wilde’s father at Mornington House 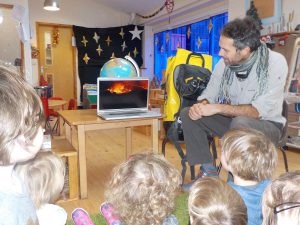 Wilde’s father came to talk to the pre-school children about his film-making experiences.  During the session he showed us footage of:

The children were able to touch objects from his travels, including:

The children were extremely engaged for almost an hour!  They comments on lots of the film footage and loved handling the real objects.  Nick also talked about plastic and how important it is to recycle and re-use plastic as much as possible.  We were all inspired following his visit.